PEARL OF THE INDIAN OCEAN 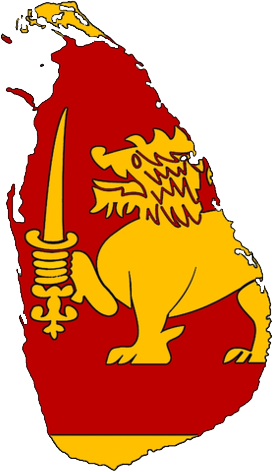 Sri Lanka, officially the Democratic Socialist Republic of Sri Lanka ( known as Ceylon before 1972) is an island nation in South Asia, located about 31 kilometers (19.3 mi) off the southern coast of India. It is home to around twenty million people. The island of Sri Lanka lies in the Indian Ocean, to the southwest of the Bay of Bengal and to the southeast of the Arabian Sea. It is separated from the Indian subcontinent by the Gulf of Mannar and the Palk Strait.

Because of its location in the path of major sea routes, Sri Lanka is a strategic naval link between West Asia and South East Asia, and has been a center of Buddhist religion and culture from ancient times. Today, the country is a multi-religious and multi-ethnic nation, with more than a quarter of the population following faiths other than Buddhism, notably Hinduism, Christianity and Islam. The Sinhalese community forms the majority of the population, with Tamils, who are concentrated in the north and east of the island, forming the largest ethnic minority. Other communities include the Muslim Moors, Malays and the Burghers.

Famous for the production and export of tea, coffee, coconuts and rubber, Sri Lanka boasts a progressive and modern industrial economy and the highest per capita income in South Asia. The natural beauty of Sri Lanka’s tropical forests, beaches and landscape, as well as its rich cultural heritage, make it a world famous tourist destination.

After over two thousand years of rule by local kingdoms, parts of Sri Lanka were colonized by Portugal and the Netherlands beginning in the 16th century, before the control of the entire country was ceded to the British Empire in 1815. During World War II, Sri Lanka served as an important base for Allied forces in the fight against the Japanese Empire. A nationalist political movement arose in the country in the early 20th century with the aim of obtaining political independence, which was eventually granted by the British after peaceful negotiations in 1948.