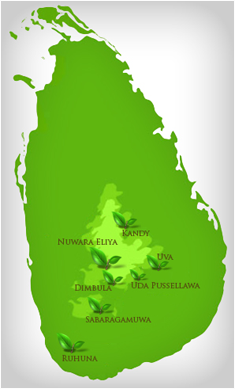 As Nuwara Eliya is unique, so is its tea. The fragrance of cypress trees and the menthol of wild mint and eucalyptus float through the air and contribute to the characteristic flavor. Recognized by tea connoisseurs, it has been said that Nuwara Eliya, at 6,240 feet above sea level, is to Ceylon tea what Champagne is to French wine. Brewed light it makes for a very smooth cup of tea that can also be iced for a refreshing difference.
Uda Pussellawa Exquisitely tangy

Located east of Nuwara Eliya, the tea grown on the Uda Pussellawa mountain range experiences two periods of superior quality. The traditional eastern quality season from July to September is the peak but the dry, cold conditions of the first quarter of the year yields a range of rosy teas. Of medium body and subtle character these teas produce a majestic flavour.

One of the earliest areas to be planted after tea took over from coffe in the 1870’s Dmbula is, perhaps, the most famous name associated with Ceylon tea. The plantations, located at 3,500 to 5,500 feet above sea level, cover the western slopes of the district. The monsoon rains and the cold dry weather produce a range of teas, from full bodies to light and delicate. Enjoyed with or without milk.

Grown at an elevation between 3,000 to 5,000 feet above sea level, on the eastern slopes of Sri Lanka’s central mountains, the Uva teas have a truly unique flavour. These teas are commonly used in many different blends but, with their different characteristics, they can also be enjoyed on their own.

An ancient capital of Ceylon, Kandy is also the first place where tea was grown in Sri Lanka. These mid country teas, grown on plantations at 2,000 to 4,000 feet, produce a full bodied tea. Ideal for those who like their tea strong and bursting with flavour. Best served with milk.

These teas uniqueness begins with the low elevation of its plantations. The southern part of Sri Lanka, though not traditionally known for its’ tea growing, does produce an exceptional tea. Grown from sea level to about 2,000 feet, the particular condition of the soil gives the leaves blackness and imparts in the brew a strong and distinctive taste. A perfect cup for those who like their tea thick and sweet, with or without milk.

Given the slightly wider range of growing altitude and more varied climatic conditions, it is not surprising that the teas of Sabaragamuwa show a little more variation in character than those of the other predominantly low-grown district, Ruhuna. As with the latter, Sabaragamuwa produces a fast-growing bush with a long leaf, very black when withered and well suited for ‘rolling’. The liquor, too, is similar to that of Ruhuna teas, dark yellow-brown with a reddish tint in the dry season, though lightening somewhat with altitude. The ‘nose’ or aroma, however, is noticeably different from the Ruhuna product, with a hint of sweet caramel, and not quite as strong as the latter. This is ascribed to the reduced monsoon exposure of Sabaragamuwa tea as opposed to that of Ruhuna. The flavour, too, is strongly marked, especially with respect to low-grown examples.